Last weekend, May 26th and 27th, saw the inaugaral LAND ROVER LEGENDS meeting at Bicester, Oxfordshire, England, and 6 dedicated Famous Four staff made the 300 mile round trip, setting off at 5am on Saturday morning. 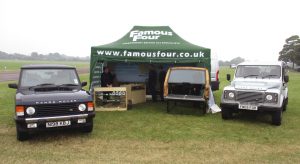 We showcased some of our exclusive products for the Classic Range Rovers, and showed our brand new, UK built, lower tailgates to show visitors, who gave much positive feedback. There was quite a bit to see, including JLR Heritage’s stand with their Range Rover Reborn projects.

Our beautiful 25th Anniversary Range Rover Classic made the trip without any trouble, and is pictured here with another of the very rare 25, and two limited edition 35th Anniversary L322 Range Rovers, including a press-launch vehicle. Thanks to Julian Lamb for the lovely photo. 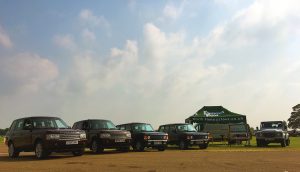 Hopefully we will be out and about visiting other shows over the next few years. We look forward to meeting you all and showing more of our expanding product range.

The annual Classic Car and Motorcyle Show at the National Exhibition Centre (NEC) took place over the weekend of November 13th, 14th and 15th 2015. It is the largest indoor event of its kind in the UK and sees visitor numbers of around 70,000, and is held over 5 large halls within the complex.

Famous Four chose this event to debut our recently completed restoration of YVB 158H, chassis number 10 of the pre-production Range Rover ‘VELARs’, following a detailed 3 year strip down and rebuild. We also took an outstanding example of a CSK Range Rover, and early production vehicle ELA 830J which is part way through a restoration in our workshops.

All three vehicles were collected by Straight 8 and loaded outside our premises before transportation to Birmingham. Richard, Jamie and Rich arrived at the NEC on Thursday and constructed the display stand ready for the public on Friday.

We were overwhelmed by the positive response from the huge numbers of visitors who came to our stand, and surprised by the degree of fondness and enthusiasm for the Classic Range Rovers shown by so many classic car lovers.

One of the highlights of our show was the re-uniting of Chris Elliott with YVB 158H. Chris owned the vehicle for ten years, almost certainly saving it from destruction, and it was wonderful to see him behind the wheel of the old girl 15 years after he was persuaded to part with it by Brian Bashall of the Dunsfold Collection, from whom we bought it ten years later.

Roger Crathorne was on hand at the Jaguar Land Rover Heritage display stand next to Famous Four, and his comments and observations on our restorations were very favourable. His near encylopaedic knowledge of the development of the original Range Rovers is awe inspiring, and his and Chris Elliott’s lifelong commitment to the Land Rover brand is surely worthy of distinction.

Our three Classics drew a great many favourable comments, and in the company of a myriad of exotic Ferraris, Aston Martins, Jaguars and the like, we feel they measured up to the very highest standards of excellence on show. A good many discerning customers have booked their own vehicle into our workshops for restoration or refurbishment work.

Our three Range Rovers, VELAR YVB 158H, Early Production Vehicle ELA 830J and CSK J32 PRW have been delivered to our stand thanks to the excellent Straight Eight Logistics, and a selection of our expert staff are embarking on a first day on the show floor of this weekend’s Lancaster Insurance NEC Classic Motor Show (website).

The show runs from Friday 13th to Sunday 15th and is one of the UK’s premier classic car events. We’re really excited to be exhibiting at the show and using such a great stage to showcase our restoration and workshop capabilities. If you at the show, drop by stand 2-260 to see our excellent vehicles and chat to our knowledgeable members of staff. We look forward to seeing you there!

Here is a selection of pictures from our stand:

With our 27th Anniversary (has it really been that long?!) looming large, Famous Four will be attending another show, however this one is a slight departure to our Land Rover specialist show appearances over the years. We will be attending the 2015 Birmingham Lancaster Insurance NEC Classic Motor Show at the  next month, on November 13th to 15th 2015, with a focus on promoting our classic Land Rover and Range Rover restoration services to the notoriously selective and exacting classic car fraternity. No pressure, then!

As part of this preparation we thought we’d splash out on a fancy new custom pop-up Gazebo to make us stand out on the show floor! Designed in house and supplied by http://gazeboshop.co.uk, we’re hoping it will make an impact on the show floor at the NEC and future shows beyond. We put it up recently (which was surprisingly easy compared to past marquees we’ve taken to shows) to check the design had come out as well as it looked on our  computer screen. Thankfully it did, I think you’ll agree it’s pretty smart looking!

Famous Four will be on stand 2-260 at the show with a selection of our excellent restored Range Rovers showcasing the quality and expertise we dedicate to our restoration work. We hope you can drop by and visit!