We have been extremely busy in the Famous Four Workshops, and identified the need for more bays and more technicians to enable us to continue to react quickly to our customers’ servicing, repair and restoration needs. We recognise the importance of ensuring appointment slots are available at short notice, as well as the need to stay ahead of the curve of technological advances in vehicle hardware and software in the modern generation of vehicles, thus helping to keep your Land Rovers and Range Rovers on the road at all times.

To this end we have made significant investments in 2018, our 30th Anniversary year, by doubling the capacity of our workshop to an impressive 10 bays, and have enrolled another three employees into our team of highly dedicated and knowledgeable workshop staff.

State of the art workshop equipment, along with improved working conditions, more space, and a brand new computer system are all now live, and we are now in an extremely strong position as one of the UK’s leading independent specialist workshops for all things Land Rover, Range Rover, Freelander and Discovery, from 1948 to brand new models, catering for diagnostic repairs, servicing, welding, bodywork, electrics, restoration and routine maintenance from our premises in Lincolnshire.

It’s fair to say that we here at Famous Four, along with many modern era Range Rover owners, rate the TDV8 series of engines very highly with their plentiful power, huge torque and relatively(!!) frugal fuel economy for such a big power unit. Like any engine, though, sometimes things go wrong and the TDV8 is no more immune than any other powerplant fitted to Land Rover’s range.

Land Rover only fitted the TDV8 engine in the Range Rover Sport (first generation) from 2007 to 2010, leaving the range without V8 diesel option for the last three years of its life. When you undertake major engine work on a 3.6 Litre TDV8 model it’s easy to see why, the big V8 diesel engine occupies close to every square inch of space in the engine bay!

No better is this illustrated than when you change a turbocharger on one of these beasts, a task our workshop were given recently. Our intrepid technician, Luke, began the mammoth task of lifting the body off the chassis to access the engine and turbocharger. As involved as this sounds, the Discovery 3/4 and Range Rover Sport of this era were designed to facilitate this, with the electrics, ancillaries and pipework all conveniently disconnecting between the body and chassis. Upon removal of the easily located mounting bolts, the entire bodyshell lifts off with the help a workshop lift located under the jacking points. It’s a job we have done quite a few times on both models to change engines and parts that are not accessible from the engine bay or underside.

As you can see from the pictures of the bodyshell engine bay area, and the engine sitting on the chassis, the engine is a mighty tight squeeze! The turbochargers, there’s one per bank of cylinders, are tucked down and away under the body on this model meaning a body-off lift is the only way to access them. The pictures of the old turbo vs. the replacement unit clearly show a major failure. Although not visible, there was a huge amount of slop in the impeller shaft, showing a total failure of the bearings, resulting in oil escaping into the inlet tract of the engine. This usually leads to contamination of the intercooler and intake hoses meaning not only a turbocharger change but also a lot of cleaning to do. Thankfully the hoses are removed anyway, and the radiator/intercooler assembly is easy to get to without the body in the way. The turbocharger itself is nestled at the back of the engine, packed very tightly into place as can be seen.

While jobs like this might appear daunting at first glance, patience and a methodical approach are the order of the day. At Famous Four our technicians are trained and qualified to carry out every job from a routine service to complex jobs such as these, as well as detailed and exacting restoration work. We pride ourselves on quality work at affordable prices and hope we can help you care for your Land Rover or Range Rover. 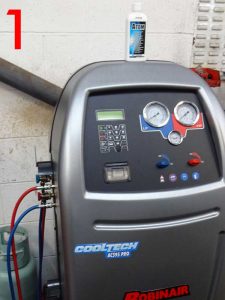 Take a look at our Workshop section for details on your specific model of Land Rover or Range Rover vehicle, and prices for Air Conditioning re-gas services, as well as a wide range of servicing, repairs and restoration work on vehicles right across the range.

Identify the air conditioning gas type in your vehicle?

Look for a label similar to the following (images 2, 3 and 4) on the slam panel at the front of the engine bay to identify the air conditioning Gas type in your vehicle.

A common problem with the 2.7 TDV6 engine as fitted to the Discovery 3 and Range Rover Sport is poor starting on very cold mornings. There are a few things that can cause this: the most common seems to be the Glow Plugs. TDV6 Glow Plugs are situated inside the “V” of the engine and can be quite troublesome to get to.

When the time finally comes to actually changing the Glow Plugs, this is where the fun starts. If you do an internet search regarding the changing of these then you will find all kinds of horror stories regarding the Glow Plugs snapping inside the Cylinder Head. On most occasions these type of stories are untrue or exaggerated due to the fact of poor fitment etc; unfortunately on this occasion the story came true!

Once the Cylinder Heads have been refitted, the engine can be rebuilt with new gaskets, seals and belts, including a new timing belt. A long drawn out job to “just” change six Glow Plugs, but one our highly skilled and professional Technicians take in their stride!

The Freelander 2 range (2007-2014 Models) have a rear differential and Haldex unit, which can cause problems and require attention. Famous Four have invested in tooling and specialist equipment to recondition the differentials, and in the October 2015 edition of LRO magazine their technical editor Peter Galilee penned a 5 page article on how to replace and repair the differential and/or Haldex unit. He visited our workshops earlier in the year and spent a day with one of our technicians, Stephen Howell, to better understand the finer points of this four wheel drive set up.

Whilst we answer some of LRO magazine’s technical Q&As each month, an article of this level of detail demands more time and attention, and Peter and Stephen spent most of the day on this subject.

Look out for the article in the October 2015 LRO

As Lincolnshire’s leading Independent Land Rover Specialist, Famous Four are constantly in demand for service, repair & restoration work on Land Rover & Range Rover models old and new. With our dedicated and experienced staff of trained technicians constantly busy handling jobs of all shapes and sizes we have had to expand our facilities to accommodate the work load. Expanding on our already comprehensive, state-of-the-art workshop facilities, we have added a third 2-post lift to our existing pair of 2-post lifts and our 4-post lift. More lifts means more work bays are available to carry out service and repair work, which results in us being able to serve our workshop customers faster.

Engineers from our dedicated heavy equipment service company arrived early this morning to get the ramp in and working. They wasted no time in unpacking, checking, marking out and installing the lift which has the capacity to lift most Land Rover and Range Rover vehicles. Once installed, a safety check and lift test was carried out and the lift was declared ready to use. Not bad for a morning’s work.

If you’d like further information on our Independent Land Rover service, repair and restoration services, see our Workshop page on the main website.

Installed and ready to go!

Put straight to work (after a safety check)

WARNING: Supplementary restraint airbags are installed within the seat assembly, proper precautions must be taken to ensure safe working in the vicinity of the seat airbags at all times. If you are in any doubt about undertaking the work refer the job to a qualified mechanic.

The inflatable lumbar support pad in the driver’s seat stops operating when the button is pressed. Other seat adjustment functions may also stop working. Upon investigation, the fuse blows when the driver operates the lumbar adjustment switches.

A poorly designed part with inadequate wiring protection results in the wiring to the actuator solenoids on the lumbar support pad fraying through due to abrasion on the seat frame. Subsequently, the wires contact the seat frame and short to ground, causing the fuse to fail.

Recommended repair is replacement of the seat lumbar pad. This involves removing the seat from the vehicle and extensive dismantling of the seat backrest part to remove the plastic cover, armrest, seat covering and seat cushioning from the seat frame to expose the lumbar support assembly. Inspection of the replacement part reveals a protective cover is now included to prevent the problem recurring. Ensure this is in place when refitting the new part to protect the wiring from further abrasion issues.

Famous Four specialise in diagnosis and repair of issues with Land Rover and Range Rover vehicles old and new, more details are available via our Workshop page.

The failure part is the inflatable lumbar support cushion.

Here can clearly be seen the failed wiring.

This rather sharp metal edge is the culprit.

The replacement now has an extra cover to protect the wiring.

A week of many gearboxes!

A theme is emerging this week in our busy Land Rover independent specialist workshop in Louth Lincolnshire!

Firstly we investigated a P38 2.5 diesel which would only engage first and reverse gears; diagnosis – gearbox replacement. This is on ramp #1 having a reconditioned automatic gearbox fitted with new drive plate.

Next came a Td5 Land Rover 90 hardtop with a worn out clutch, which we removed only to discover that the main-shaft on the gearbox was excessively worn. Replacement gearbox on its way. At the same time we will fit new OEM parts; clutch plate, cover, spigot bush and dual-mass flywheel.

We are collecting a Land Rover Discovery Td5 from Immingham docks later this week which has come into the UK from Norway for us to supply and fit a reconditioned automatic gearbox. We hope to be able to turn it around with a smart new gearbox in time for the next ferry sailing back to Gothenburg.

Today’s pictures show one of our technicians hard at work under a Land Rover Defender 90, and a line of Td5 Discovery IIs in our main workshop awaiting fitment of new Land Rover parts and accessories.